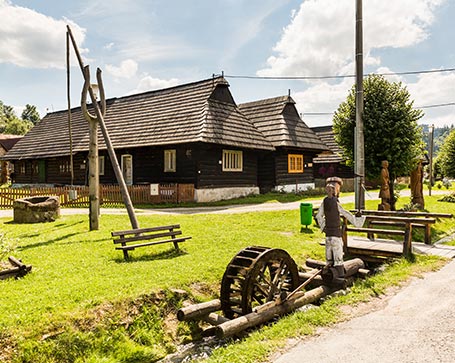 Houses were usually built hand made and architecture characteristics a big diversity in look, rich components, and forms.

This build-up area of farm courtyards is characteristic for middle Orava and houses were built at the end of the 19th century and beginning of the 20th century.

Did you know, that Beaver rala was announced for monument reservation of folk architecture exactly on the 4th of September 1977? It is not on the list of open-air museums because these houses are permanently inhabited or reconstructed for recreational purposes. It can pride oneself, that it is the biggest complex of original fol architecture in middle Europe.

If you take a good look at the roof timbers, that is well kept in each house and you can find there dates and name of the builder, you will find the oldest house – house number 115, built in the year 1833. Along with folk architecture is a very characteristic sign – the merging with the environment, it never fought against nature, but it always becomes a part of it.

Tip at the end

After the visit of original folk architecture, you can find out more and take a look at the collection of folk culture. Visit a small ethnographical museum. You can find this museum in reconstructed building former religious school number 194.